On 13 November the company Rudnik was visited by the president of the Municipality of Gornji Milanovac, Dejan Kovacevic, the head of the Staff for Extraordinary Situations, Milorad Dimitrijevic, and by the Staff members.

In line with the passed Report at the meeting of the Staff for Extraordinary Situation and by checking of the activities and the readiness of the subjects for the winter season, the Municipality representatives, accompanied by the manager of the company Rudnik, visited the flotation dam 9 in Majdan.

It was stated that the largest dam on the territory of the Municipality of Gornji Milanovac is safe in all segments. “It was constructed as to withhold an earthquake up to 9 degrees Richter. In 2014, when the centennial waters withdrew, the dam fulfilled its task and prevented a flood wave which would have flown to the city from that direction. The water which flows out of the dam is safe according to all ecological standards, and by 2023 a plant for additional water treatment will be constructed so that everything could be in line with the strict regulations of the European Union in this field”, said the President of the Municipality, Dejan Kovacevic, after the visit to the dam. 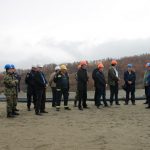 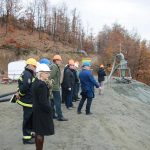 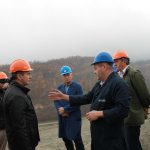 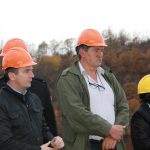